To get more information on the possible dates of the excursions, their cost, availability of the bus seats, as well as to purchase the desirable excursion program beforehand, please feel free to ask the Reception desk Administrator.

This bus excursion gives a remarkable opportunity to see the main attractions of our city: the famous monuments, architectural ensembles, bridges, embankments and parks with a guide.

The route of the City Tour:

Our buses start in the same place. In case of necessity (traffic jams, open-air events, etc.) the route can be changed. 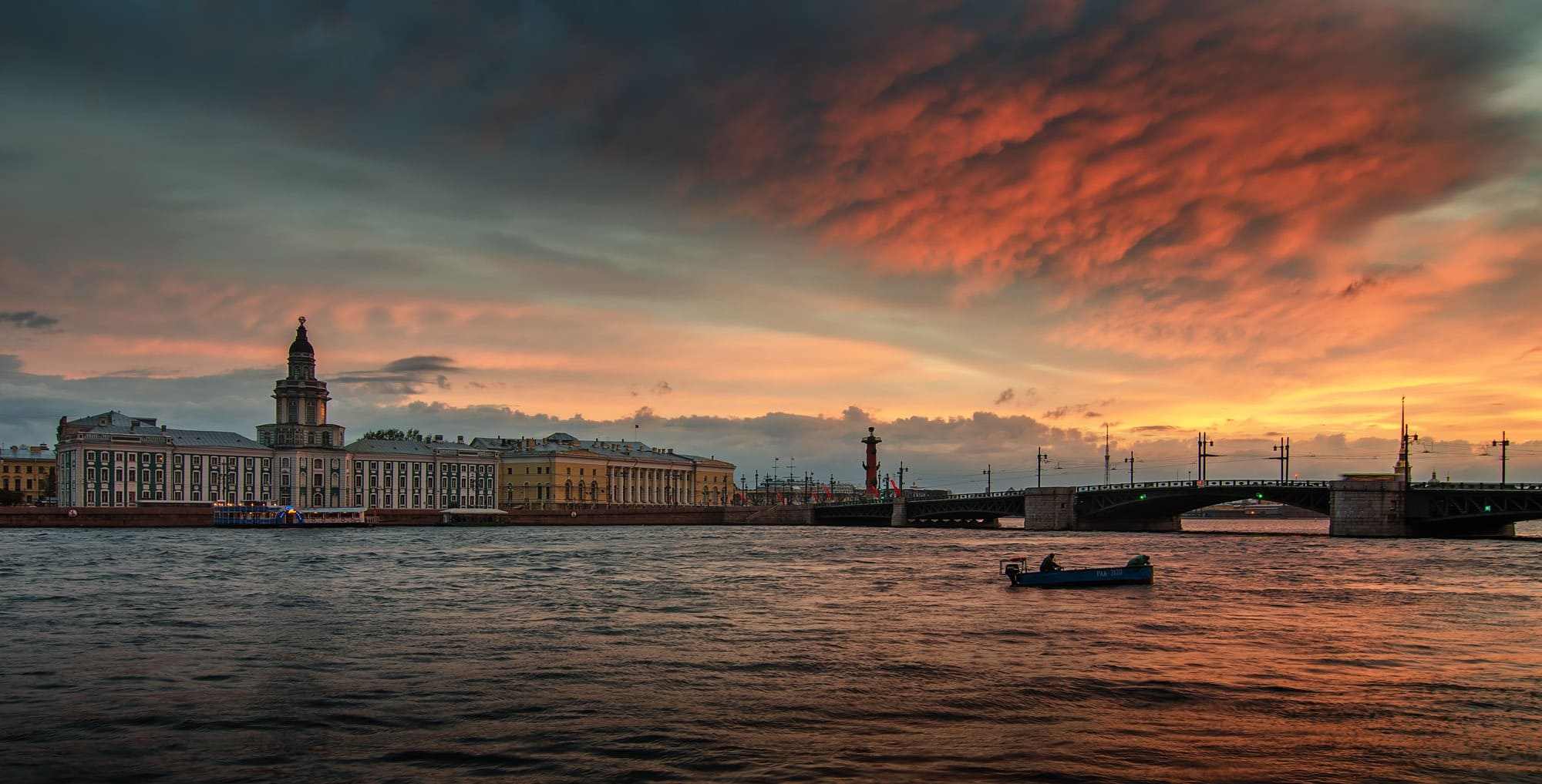 White Nights are definitely the most romantic thing in St. Petersburg, with its world-famous movable bridges, opening each night to let ships go up and down the stream. Apart from the classical bridges our city recently got several brand new cable bridges, which are also quite interesting to see.

During the Tour, you will see the new cable bridges at the sunset, a brand new football stadium, constructed for the 2018 FIFA World Cup, the Gazprom skyscraper (the tallest building in Russia and Europe).

The Tour continues on a comfortable tourist boat. From the water you will see four stunning bridges, constructed by the Russian tsars, opening one after the other. After the boat tour, we will bring you back to your hotel. 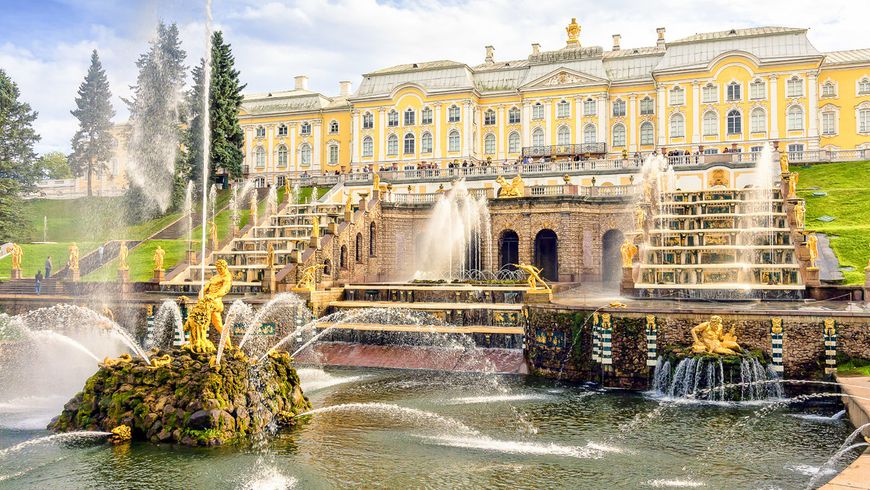 As you travel to Peterhof, you will be given detailed information about the history of the Peterhof Road and the town of Peterhof. Upon arrival, you will embark on a comprehensive tour of the Peterhof Grand Palace and park.

Peterhof is located on the southern coast of the Gulf of Finland, 29 kilometers away from St. Petersburg. Here a small house for Peter the Great was built in 1705, where the Tsar could take a rest on his way from Kronshtadt to St. Petersburg. In 1714 the Emperor decided to turn Peterhof into his main out-of-town residence. Here, in the XVIII and the XIX centuries, a grandiose complex of eleven parks, dozens of buildings, and pavilions with more than 200 fountains and numerous sculptures were formed in the area of over 1000 hectares.

The Grand Palace, built for Empress Elizabeth in the Baroque style, is a composition center of the Ensemble.

The Grand Fountain Cascade, which is unique both technically and artistically, forms a decorative pedestal for the Palace. The Grand Cascade, embellished with numerous fountains, gilded statues, bas-relief and vases, is crowned with the sculpture group known as «Samson Tears Open the Lion’s Jaws», which is dedicated to the victory of Russia in the Northern War. 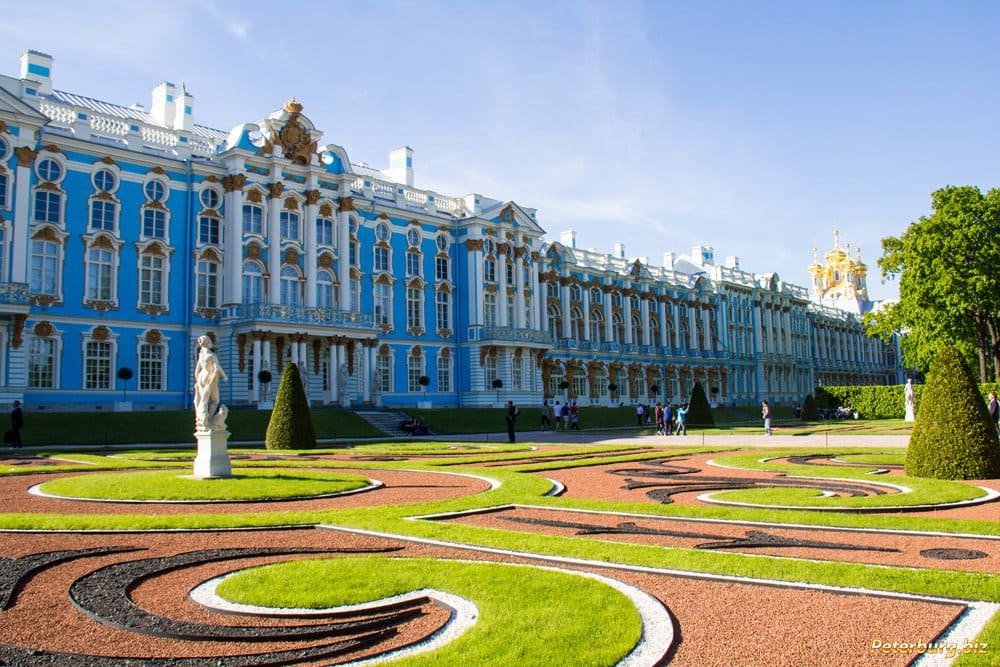 Excursion along the Tsarskoselskaya Road. You will be given detailed information about this road. Also, you will visit the Catherine Palace with the Amber Room and park.

Pushkin – «The Tsarskoye Selo» State Museum-Reserve – is a brilliant monument of world architecture and park and garden artistry of the XVIII-XX centuries. A magnificent group of architects, sculptors, and painters brought the desires of their Royal clients to fruition here.

In «Tsarskoye Selo» the full range of artistic styles is represented, from the Baroque and the Classical eras. Imperial rulers from Catherine I to Nicholas II have left their mark on Tsarskoye Selo.

The composition center of the Ensemble is the Catherine Palace, a magnificent Baroque-style palace. The Great Hall of the palace and the Golden Enfilade of formal halls, among which can be found in the Amber Room, amaze with the luxury of their decoration.

More than 100 architectural objects with a total area of 300 hectares occupy the territory of the Catherine and the Alexander Parks: from the most magnificent palaces and monuments to pavilions and bridges. Strolling through the alleys of these parks, you will be treated to views of whimsical lodges, elegant classical buildings, many monuments executed in marble, exotic constructions designed to imitate the Gothic style, and also Turkish and Chinese architecture which lend the park a romantic air.